You could be the victim of a phone scam and not even know it. Phone scammers, many times prisoners, will use the call-forwarding feature to make dozens of long-distance, collect phone calls with your phone line. Sometimes this phone scam will be conducted on your primary phone line, but more often than not this phone scam is carried out over secondary phone lines, like fax machine lines, so that the victims don't realize until it's too late. 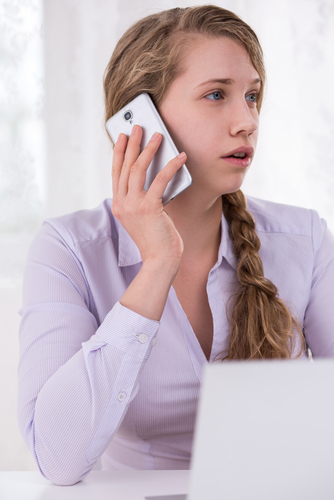 Often referred to as the *72 prison phone scam or call-forwarding scam, there are several variations.

Inmates will call phone numbers and hope for someone to accept their collect call. Once they have someone on the line they will convince the person that they called to press *72 and dial another number. This will enable call-forwarding on your line whenever the inmate calls again. In variations of this scam, inmates have found ways in which to make secondary fax lines forward calls for them.

By enabling call-forwarding on fax lines, the scammers are able to avoid being caught for more time due to the fact that most people don't pay as much attention to these lines. In some cases, scammers have been able to bypass the step of first calling and convincing their victim to set up the call-forwarding feature by hacking directly into the customer's phone account and setting up the feature themselves.

What You Need to Do

If you actually have a loved one or acquaintance in jail and could be receiving collect calls from prison it can be difficult to identify this scam. If you don't know anyone in prison, you should avoid answering any collect calls from jails.

To make sure that you haven't fallen victim to the *72 phone scam routinely check your phone bill for odd charges and pay attention to whether your phone frequently rings one or two times and then seems to hang up. Like with the one-ring phone scam, a phone that frequently rings and hangs up quickly could be forwarding the call and be a sign of potential scam activity.

If you feel that your phone line is being used for scam activity and you are being charged for calls that you're not making you should immediately contact your phone company. You can set up a password on your account and also block collect calls as precautionary step.

You should also contact the corrections facility that the caller claimed to be calling from and ask that they block outgoing calls to your phone number.

If you ever receive a call from an unknown number you can look it up in CallerSmart's reverse phone lookup phone book or in our phone tracing app for iPhone. You can search numbers that have called you for suspicious behavior and help others in your community identify potential scams by leaving your feedback on the phone numbers that call you.