One of the main tools that scammers use to exploit their victims is fear. The counterfeit bill scam is a perfect example of this. 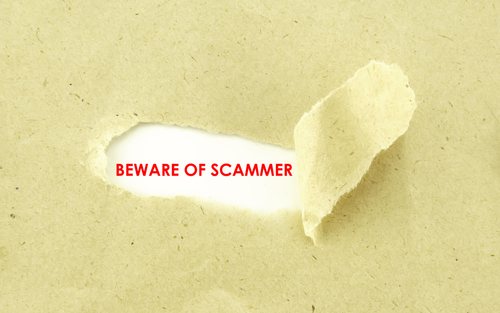 Counterfeiting is a serious crime. Anyone convicted of producing or knowingly possessing counterfeit money may face up to 20 years in prison and a fine of up to $250,000.

Nobody wants to be convicted of counterfeiting. Similar to other impostor scams, like the sheriff's office scam, scammers will pretend to be police officers and threaten to have their victims thrown in jail if they don't pay a fine. They may also claim the bank is the suspect of the investigation and ask for money from your account to assist them.

How Does the Counterfeit Bill Phone Scam Work?

This scam starts with a call from someone claiming to be a police officer. They say that they have received complaints and have evidence that you've used counterfeit money. They will pause briefly give you time to panic. In some variations of this scam, the caller may claim that it is a family member or friend that they have in custody for counterfeiting.

The scammer will then claim that the fake money originated from your own bank account. They may ask you to do any of the following:

They'll request that this money be sent to them via wire transfer and this will be the red flag that this is a total scam.

How to Protect Yourself From the Scam

Don't panic if someone calls you claiming that they have evidence that you've counterfeited money. It's clearly either a misunderstanding or a scam. Here are some warning signs to look out for.

Remember that police can't trace money from a bank account.

Once the money is withdrawn, it's nearly impossible to trace. Never believe anyone claiming they could trace cash back to your personal bank account.

Police officers will not ask you to withdraw money from your bank account as part of their investigation. First of all, this would be an extremely reckless way to conduct a real counterfeiting investigation. Secondly, banks don't designate money for individual accounts, so there'd be no reason for them to make this request.

If real law enforcement officials believed the bank itself was laundering counterfeit money, they would go through different channels to get evidence. They wouldn't reach out to customers.

Be suspicious if the caller doesn't have any of your personal information.

You should always be wary of anyone that claims to have personal news without verifying that they know who you actually are. If they claim to have your child or another family member in custody, then you should ask them which child. If they can't answer the question, then you should just hang-up and report them.

How Can You Report the Scam?

You can also lookup and report this scam using our phone tracer app for iPhone or in our online phone listings directory.