The holiday season is upon us. Here at CallerSmart we love the holidays, it's wonderful to get together with loved ones, exchange gifts, and celebrate a brand new year! However, during this happy time of the year we know that there are spikes in phone scams. Scammers use the season of giving to prey on the unsuspecting. 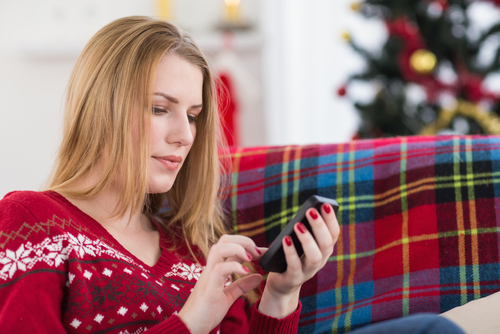 Here's a rundown of five common holiday scams and what you can do to avoid becoming a part of them.

We've all gotten the automated calls telling us that we've won a $100 gift card to Walmart or some other store. These are the too good to be true offers that are just trying to get information out of you. It’s best to just hang up on these annoying robocalls.

Another scam involving gift cards is going around this season that is different from the free gift card offer. This new scam is targeting the elderly. Scammers are using the grandparent scam, which tries to convince grandparents that their grandchildren are in danger, but instead of demanding payment via wire transfer or MoneyGram, the scammers are instructing their victims to go to their local CVS or Rite Aid and buy thousands of dollars worth of gift cards to pay. Victims are threatened and told not to tell police, instead they are instructed to say that they are buying the gift cards to give as gifts to family members.

Elderly are the most vulnerable in these types of scams. In order to prevent senior loved ones from becoming a victim tell them not to answer calls from numbers that they don’t know. If they do answer an unknown number and the caller claims to be their grandchild or have their grandchild instruct them to hang up and call the grandchild directly. If you or someone you know has experienced a call like this you should report it to local authorities and your state’s Attorney General.

Charity phone scams are a popular one during the holidays. Since people are in the giving spirit scammers make the most out of the situation. If you’re receiving a lot of telemarketing calls from charities your best bet is to block them. Telemarketers take a hefty chunk out of the funds that they raise on behalf of charities, which could mean that only half the money you donate is actually helping the cause you’ve chosen to give to if it’s given as a result of a telemarketing call.

On top of the fact that telemarketers are taking a cut of the donation, some of the callers might not even be legitimate telemarketing companies, but scammers out to get your credit card information.

If you decide to give this season it’s best to avoid the telemarketers by letting them go to voicemail and then blocking them. There are many amazing charities out there that do incredible things with your donations, you can look for these charities on the Better Business Bureau's Wise Giving Alliance site. If you’ve been contacted by a telemarketer on behalf of a charity that is not adhering to National Do Not Call Registry or is a scammer you should report them to the Federal Trade Commission (FTC).

Although, not directly related to the holidays, this is a common scam throughout the winter months. Using caller ID spoofing a scammer will call pretending to be from your electricity provider. The scammer will inform you that you owe money and that they are going to cut the power if you do not pay up immediately.

To avoid utility phone scams, ask the right questions. Ask the caller for their name, the amount that you supposedly owe, and a number that you can call them back at, if this number doesn’t match the one they called you from this is a major red flag. If the caller asks you for information, like your address, account or payment information do not answer them. Instead hang up and call your utility company directly from the number that is listed on their website. By calling them directly you can verify whether or not you actually owe anything and you can also let them know that they have a scammer impersonating them. It’s also important to report scam calls like this to your state’s Attorney General.

The IRS phone scam is nothing new. It’s been going around for several years now, but in 2016 it’s going to get a whole lot worse. Congress recently passed a law that requires the IRS to start using private debt collectors to call on back taxes, the law goes into effect this month and its repercussions will start to be felt in the new year.

The IRS was against the passing of this new law. In the past, to prevent the spread of the IRS phone scam, the IRS had been telling people that they don’t call to collect on taxes, and now private debt collectors are going to start doing that. It’s likely that this will lead to an increase in IRS phone scammers. If you receive a phone call from someone saying they’re from the IRS and you owe money, ask for their information and hang up. Don’t give them any information regarding yourself. Once you get off the line contact the IRS directly in order to check if you actually do owe anything and report the scammer if you don’t owe anything.

Chances are that if you don’t think you owe anything, then you don’t owe anything and the caller is a scammer. You can reach the IRS by calling 800-366-4484 or online through the Treasury Inspector General for Tax Administration (TIGTA)’s scam reporting form.

Many singles make it their resolution to be more sociable and go on more dates in the new year. With Valentine’s Day right around the corner in February there is always a spike in the online dating sites’ registrations around the holidays. With more singles looking for love online, scammers will create fake profiles and impersonate real people in hopes of finding a victim. It is usually the most romantic and open people that fall victim to online dating scams as they are more likely to trust more quickly. Warning signs of a romance scammer are:

To avoid romance scams you should run a Google image search on the photos of your online love interest. This will show you whether or not the person you’re talking to has photos that are being used on other sites. If you decided to exchange numbers to make plans and communicate more easily, run the person’s number through a reverse phone lookup app to check for suspicious behavior.

If you feel that the person you are talking isn’t who they say they are, cut ties immediately and save yourself the heartbreak. You can report romance scammers to the FBI through the Internet Crime Complaint Center (IC3) and on RomanceScams.org, a non-profit that aims to stop romance scammers and spread awareness.

To help warn others of these scams during the holidays you can download CallerSmart's app for unknown number look ups on your iPhone and leave feedback on scam numbers. If you don't have an iPhone you can still run reverse phone number look up searches on our website and leave your feedback.