Man who talks like this is named Confucius.  For all you nerds who live and breathe Star Wars, Confucius was essentially a living and breathing Yoda.  Super annoying backwards sentence construction they both did.  They were both wise and most importantly they were both teachers!  Geez, about time a teacher gets some ink here!

Mind blown time!  Confucius is the western name given to the teacher born in 551 BC in China.  His actual name was Kong Qui which translates to Master Kong.  Wonder if he had a brother named Donkey, a nephew named Diddy and if they engaged in throwing wooden barrels?

Confucius had many other titles, as well.  Typically he was referred to as "First Teacher", "Great Sage" and the best, "Model Teacher for Ten Thousand Ages."  So all you teachers out there, get on his level since his classroom was full of awards and motivational posters on the wall withhis own sayings!

Confucius' philosophical beliefs mostly stem from his childhood.  Confucius lost his father at the age of 3 and his mother when he was 23.  His greatest tenet was the respect of the family, or filial piety.  Just so everyone knew that he was mourning and respecting his mother he wore nothing but black, ate little, stayed inside his house, and studied philosophy - for three years!  Replace studying philosophy with playing XBox and you have a typical lives-at-home 37 year old.

This dude's rules were golden!  Remember when you were in preschool and you had trouble sharing and working with your peers?  Then a teacher straightened you out with "Now treat everyone how you want to be treated." Surprisingly, she did not come up with that meaningful phrase at all.  Maybe she wanted to get robbed because she stole that quote from Confucius...some teachers.

Confucius basically taught like he was a counselor at a summer camp.  He called his principles The Six Arts and he focused on archery, calligraphy, math, music, chariot-driving and Chinese rituals.  Hey, 1 out of 6 ain't bad, right?!

Confucius continues to inspire teachers to have acceptance, teach peace and grow out slick Fu Manchu mustaches!  His enviable facial hair would have gotten him plenty of free craft beers at the local tap house from all the indie kids.

Confucius died in 479 BC believing his school of thought had made little impact on Chinese culture.  What surely made an impact was his tomb.  His body was placed inside a rock on the riverbank and an artist carved the rock into the shape of an axe.  Forget a coffin or cremation, it's all about that #axeafterlife!!!

After his death, his ethics model became the official imperial philosophy of China and his belief system still influences many to chase the dream of a peaceful world. 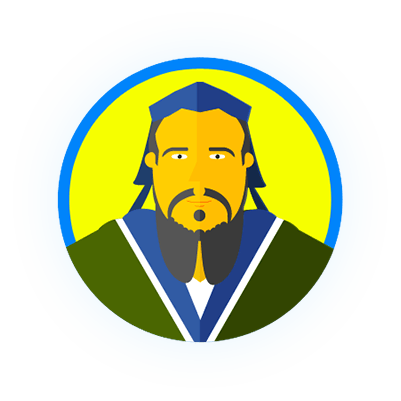