If the only thing you know about Galileo is that he is prominently featured in Queen's Bohemian Rhapsody then you need to read more.  If you don't know what Queen's Bohemian Rhapsody is then you are probably up past your bedtime.  Known as the “father of modern science”, ”father of modern physics” and “father of 3 kids out of wedlock” you could probably hear "…I like it when you call me Big Poppa" when you walked by his house!  What wasn't he the "father" of because he had more titles than an aging rapper (looking at you, Snoop Lion)?

Galileo Galilei (could his parents at least have thought about a name for more than a second?!?) was born in Pisa, Italy during the height of the Renaissance.  He is largely responsible for making a place with a shoddy tower that leans famous.  I know what you’re thinking, “Oh, that’s the place where tourists take annoying pictures with their hands up humorously like they are making the tower lean” and then post it to social media.  But it was atop the Leaning Tower of Pisa that Galileo disproved Aristotle’s 1,000 year old theory of heavier objects.  He dropped metal balls of differing weights and noted they hit the ground simultaneously, shattering long-standing beliefs.

Born in 1564 to a poor family, Galileo had a drive to invent objects because he needed to bring in money for the family.  He was fascinated with the idea of telescoping objects that could be small and expand as needed.  He created the telescoping selfie stick long before narcissists knew what they were!  Galileo then improved upon the Dutch-designed telescope by adding elements of magnification.  This advancement was a massive success for astronomy!

Galileo was able to use his telescope to discover the 4 moons of Jupiter and Saturn's rings.  When Galileo discovered the moons he became a massive celebrity in Italy.  He was even hired by the Medici family (the Kardashians of the 1500s but with skills and power) and received his own reality show on E! titled Gazing with Galileo.

For someone so smart, Galileo had a penchant for staring at the Sun.  You know the bright thing your parents told you not to stare at?!  He wanted to prove the existence of sunspots, which he did.  The biggest problem was that his newfangled telescope magnified the light of the Sun directly onto his eyeballs causing him to go blind.  Think of magnifying glass and ants – ouch!

Galileo confirmed Copernicus’ idea that the Sun was the center of the universe, not the Earth.  This actually got him into trouble with the Catholic Church.  Back during the Inquisition, the Catholic Church could question and torture anyone that went against their word.

Galileo stayed in his house the last 8 years of his life.  It was not because he was the weird hoarder down the street, but due to the fact that the Catholic Church stated it was the only way he could remain alive!

Forever linked to science and space, Galileo’s work inspired later scientists such as Isaac Newton and Robert Boyle.  He serves as a great reminder that creativity, questioning and perseverance can push someone from a life of poverty to a plush lifestyle.  His name continues to influence space as NASA’s Galileo unmanned spacecraft orbited Jupiter 350 years after his death. 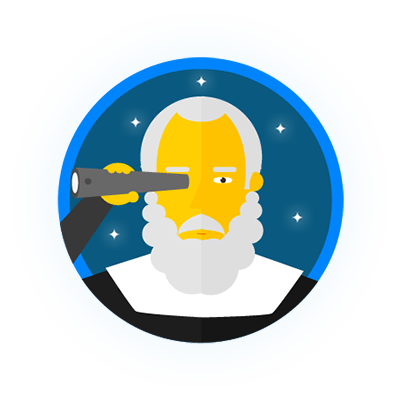