It's time to talk about Michelangelo, the rich con artist that loved poetry!  What did you think I was going to say, the Renaissance painter of the Sistine Chapel and sculptor of David and La Pieta?  We're talking about the same guy, this is just some revisionist history to get some views!

Born in 1475 to a banker in Florence, Michelangelo de Lodovico Buonarroti Simoni had a ridiculously hard name to spell.  His name has become synonymous with the High Renaissance (insert stoner laugh) and he influenced essentially all western art.

Before he became "the artist" that a Teenage Mutant Ninja Turtle was named after, Michelangelo sought apprenticeships and copied paintings in Florence, Italy where the epicenter of the Renaissance.  While honing his craft, Michelangelo had his nose broken and permanently disfigured by a jealous rival.  The rival grew so enraged at the skill of Michelangelo that he punched him and crushed the bridge of his nose.  The old adage is true that "haters gonna hate."

Michelangelo got his first taste of high art when he ripped off a high-ranking Cardinal.  He carved a cupid in the style of the Greeks and then threw dirt all over it and claimed that it was from antiquity.  His con proved great until word finally reached the Cardinal that paid through the nose for fake art.  The good news for Michelangelo was that the Cardinal wasn't even that mad and invited him to the Eternal City to serve as a commissioned artist.

Michelangelo's greatest works were the sculptures of David (that guy was chiseled!) and La Pieta, which were both made before he turned 30.  When asked about David, Michelangelo stated "Carving is easy, you just go down to the skin and stop."  Can kinda see why that kid broke his nose back in the day. Michelangelo was often known for being sharp-tongued, temperamental while he worked.

Predominately known as a sculptor, painter, and architect, Michelangelo enjoyed creating poetry.  He was prodigious at all of his endeavors except for poetry.  He often wrote about three topics that pervade human emotion:  love, sex and his overactive bladder?!?  There is a reason we do not include his poetry as some of the classics because he was a hack!

Nicknamed "the Divine One" during his lifetime, he also had many biographies written about him while he was alive.  Talk about awkward when the fangirl met Michelangelo and addressed him as "the Divine One" and talked about how she read all of his biographies.  #stalker!

Michelangelo had a penchant for turning marble into money!  He was hated by Renaissance hipsters because he cashed in on his fame and talent during his lifetime instead of being poor like most artists. Michelangelo was one of the few world renowned artists that died with a few coins in the bank.  I bet the Renaissance hipsters only liked his pre-pope work, you know, before he sold out to the man!

Michelangelo even designed military fortifications when Florence seceded from the dictatorship of the Medici coupled with the pope.  His designs held the pope's army (sweet name for a metal band!) for almost a year.  After the defeat of the Florence resisting forces, the pope asked Michelangelo to continue his relationship since he was the best.

Like most artists, Michelangelo was smelly.  He apparently did not enjoy a solid bath since it irritated and dried out his skin.  He never had a chance to collect his pensions since he died in the same week that he stopped working.  He lived more than twice the age of the average male when he passed in 1564 at the age of 88.  It is rumored that the clothes had to be peeled off of his body because it had been such a long time since he bathed. 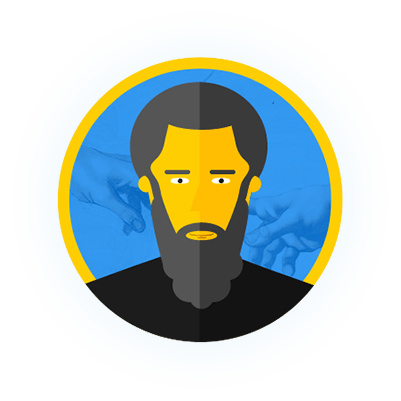