Born in England in 1809, this "Chuck D" was the first public enemy - that is for the Church! Of course we're talking about Charles Darwin rapping his controversial theory of evolution:
On the Beagle, I bear witness,
Naturally selected were the fittest.
Finches, turtles and even armadillos,
Adapting to life, you feel me, homes!?

Like most college students, Darwin struggled to find his calling which irritated his father and his father's checkbook. His list of studies read as follows: doctor, clergyman and geologist. Darwin also took a 5 year trip around the world by boat where he wasn't wasting his youth away as his father thought, but finding his passion. Along the circumnavigation Darwin began to note the strange differences in animals secluded on the Galapagos Islands - the basis of his influential work On the Origin of Species.

Oddly, Darwin was a member of the Glutton Club in college where students would eat strange animals. He carried that propensity forward when he studied wildlife on the Galapagos. He would draw the exotic animals then eat them! Sounds like a reality TV hit with the combination of The Joy of Painting mixed with Iron Chef.

After returning from his 5 year voyage around the world he met his wife, Emma, at a happening family reunion. Ironically, Darwin narrowed his own family gene pool when he naturally selected his first cousin.

Fifteen years later, Charles Darwin began work on his polarizing and influential work, On the Origin of Species. Within the book he outlined how species with advantageous features were selected by nature over weaker species - The "survival of the fittest". The book became unexpectedly popular when the first run of 1,250 copies sold out.

Darwin was not a Christian or an Atheist, rather he stated that he was agnostic. He believed God existed, just that He was not active in the lives of humans (so God's a government worker?). It was also through his spiritual beliefs that he began to push for the abolition of slavery - one of the first famous supporters to take the radical stance at the time. Coincidentally, Darwin shares the same birthday as another important abolitionist, Abraham Lincoln.

After both criticism (from his old clergymen friends) and praise (from his new scientist friends) for his work, Darwin became tied to his house due to illness. He believed in the benefits of hydrotherapy and used water and moisture to alleviate his pain (I smell an infomercial spot). He later passed away in 1882 from a heart attack in his family home in Downe, England with his family surrounding him. 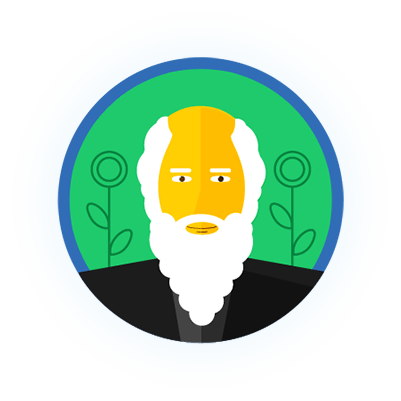