Know the guy who's got a jacked up truck and peels out at every red light? The one who deep down is probably just embarrassed because he's got a touch of LMS (Little Man Syndrome), better known as a "Napoleon Complex"? Not that Napoleon Bonaparte was the first small man who did machismo things, it is just that his accomplishments were so grand that his name is forever linked to anyone trying to overcompensate for their tiny stature. Oddly, Napoleon was not even short by contemporary standards as he stood at 5'6", not the 5'2" that is often published about him. Typical heightist, revisionist historians!

Napoleon was born in 1769 on the island of Corsica (it's kinda like the Puerto Rico of France) to Italian descent parents. At the age of 10 he was sent to military boarding school and eventually became an artillery officer by 1785. He overcame immense odds by quickly learning French (he spoke Italian) and cramming multiple years of schooling into one because of financial hardship. He was basically the Doogie Howser (Google it!) of the French military.

Impressive with his cannon, Napoleon shot through the ranks. He helped develop semaphore (the use of signaling flags to communicate over short distances) so his forces could work together better than Hall & Oates or Dre and Snoop.

During the Reign of Terror (you know, violence, guillotines and berets with no heads) Napoleon headed the Committee of Public Safety to quell the violence created by the French Revolution. He created so much safety for the public that France soon became a military dictatorship with Napoleon at the helm. Oh snap!

Like most dudes Napoleon was grouchy in pictures. However, it was not because he was tired of his wife's millionth upload to social media like today's dudes, but that he suffered from raging 19th century hemorrhoids. Even more interesting since the famous quote "A picture is worth a thousand words" was attributed to Napoleon (he actually said "A good sketch is better than a long speech").

Essentially taking power in 1800, Napoleon quickly grew the French Empire through war and alliances. He let his ego get carried away, though. Soon he was biting off more than he could chew when he tried to invade Russia (only the largest country in the world). The French were angry at failure and exiled him to a tiny island, Elba. He later returned triumphantly for "100 Days" and again started trouble. After his loss at Waterloo, Napoleon was sent on an all-expenses paid vacation by the British in 1815. This vacay was to the tiny, secluded volcanic island St. Helena...forever!

Napoleon was slowly eaten away by stomach cancer (some say arsenic poisoning) for 6 years on St. Helena. He eventually succumbed to the illness in 1821. The greatest legacy left behind was not his roller coaster ride of empire building, but his Napoleonic Code which standardized laws for the entire country. Most countries model their national laws off of Napoleon's from 200 years ago to create clear guidelines of rules and punishments. 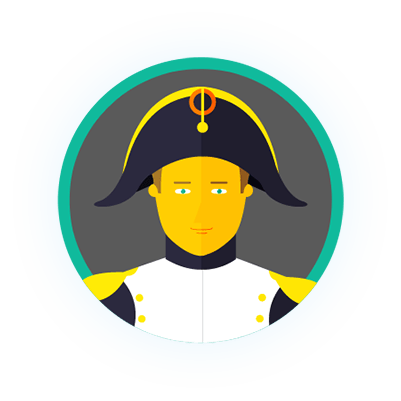