The Heroine of Hygiene, the Titan of Tidy, the Queen of Clean! Known better as the Mother of Nursing (who was her publicist?), it's Florence Nightingale time! Let's get anti-fungal!!!

Born in Florence, Italy in 1820 to wealthy English parents, Florence Nightingale went against her parents wishes and entered the nursing field at the young age of 24. Wait, I thought you were supposed to listen to your parents as long as their name isn't Woody Allen or Octomom? Nightingale's parents believed nursing work was only fit for lower classes but Nightingale explained that she had a vision from God (seems a majority of famous people have these) to serve others and become a nurse.

Known as "The Lady with the Lamp" because she walked the Crimean War facilities at night, "FloNighter" saved countless lives through diligence and cleanliness (it is next to godliness, you know). Many songs and poems were written in admiration of her during her time in the Crimea (This place stays bumping!).

If Nightingale's ideas seem rudimentary it's because they became the foundation of all nursing schools when Flo instituted the first school's curriculum. Step 1: Keep the place clean! Step 2: Check on the patients. Wow, we have come a long way if someone had to make these actual rules for nursing.

Have you heard the new joke about Florence Nightingale? It didn't spread cause she killed infection! The infection rate plummeted rapidly because of her efforts and word of her practices spread to other countries (i.e. American Civil War hospitals, etc.). In the Crimea, she used more dressings than a Thanksgiving dinner and wrapped those bandages tighter than a hipster's jeans (yeah, that tight) to prevent infection. Nightingale was also known as the world's first professional nurse. Like other famous Florences, Nightingale would sprint (Flo-Jo style) to the wounded soldiers who were overjoyed knowing that their "Dog Days Were Over" (a la Florence + the Machine) thanks to her care.

Besides wonderful bedside manner, Florence possessed a gift for math. She used graphs and statistics to prove her point that sanitation and survival rates were, and still are, directly proportional. The Nightingale Rose diagram was considered the first graphical representation of statistics. In fact, here's the unofficial "Nightingale Theorem", which I just made up for all us "mathletes" out there: (war + infection) x (unsanitary conditions) < Florence Nightingale!

Florence died peacefully in her sleep at the age of 90 in 1910. Because of her tireless work for the British Empire, she was offered a place in Westminster Abbey but her family chose to bury her in the family plot. Florence will forever remain a symbol of selflessness and compassion. 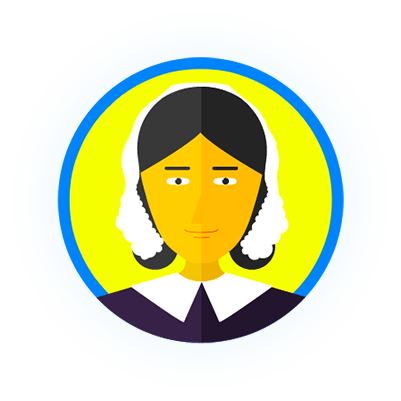