Many names and titles were bestowed upon Pocahontas.  Born to a powerful Algonquian chief, Powhatan, in 1595, she was known as Matoaka, Amonute, Pocahontas and……Rebecca???  Pocahontas translated to “playful one” and she was quite the tomboy growing up.  Numerous titles were applied to her:  ambassador, princess, humanitarian and celebrity.

Disney shockingly lied about her in their cartoon, most likely because they would not be able clear a “G” rating, Pocahontas didn't sing to the blue corn moon or wear any clothes.  As an adolescent she also rocked a fierce mullet.  Her head was shaved with mussel shells and she had a long section braided in the back.  Most follicle taxonomists classify her mullet into the “shaved ponytaillet” category.  She was able to have more traditional hair once she reached the age of 14.

Pocahontas often helped the colony of Jamestown which struggled mightily in 1607.  She helped facilitate trade for food in exchange for trinkets, beads, copper pots and the occasional gun (no way this could be foreshadowing!).  She developed a friendship with John Smith and was seen as a sign of peace to the English colonist.  The relationship between the Native Americans and English ebbed and flowed between peaceful and hostile depending on how hard food was to come by.

You don't need any real research skills to know the love story of John Smith and Pocahontas was fake.  He was about to be executed when she placed her head over his due to true love?!?  If it sounds like Nicholas Sparks wrote the story then, yeah, it's not true.  Here's what actually happened:  John Smith was a lying marketer (redundant) hoping to entice more business and migration to the colony of Virginia and cash in on some personal fame, as well.

Pocahontas potentially inspired Kanye's song Gold Digger when you look at her life arch.  Daughter of Chief Powhatan (most powerful native on the east coast), passed over a relationship with the impoverished John Smith, married tobacco entrepreneur and plantation owner John Rolfe....cha ching!  She ain't messin’ with no broke figures!

Some English colonists attempted to leverage her kidnap for food and prisoners in 1613.  She was captured and taken to Jamestown where she learned English, some of the customs and converted to Christianity.  She even changed her name to Rebecca and turned on her roots faster than Patti Hearst.  She earned another nickname at this juncture when many back in England referred to her as the “civilized savage” which would have been a PR nightmare today.

While in captivity she met John Rolfe, a wealthy tobacco planter.  From all accounts they fell in love faster than Elizabeth Taylor.  They soon had a son, Thomas, and the Virginia Company saw an opportunity.  The company believed the Rolfes could stir up interest in the colony if they toured England.  In 1616 it was decided that “Lady Rebecca” and her entourage of Powhatan men would travel the countryside.  She became a huge celebrity and people clamored to see and interact with Pocahontas.

After a year in England, the Rolfes decided to return to Virginia.  However, Pocahontas died of dysentery (diarrhea on steroids) at the age of 21.  Soon after her death, her father passed away.  And soon after that, fighting and the ultimate demise of the Powhatan tribe occurred.

One of the most famous names in early American history, Pocahontas served many roles for the colony:  ambassador, diplomat and celebrity.  She helped secure food for the starving Jamestown settlers.  Through her work the vastly different groups were able to maintain a certain level of peace.  Lastly, she was able to garner attention for herself and the colony by touring England. 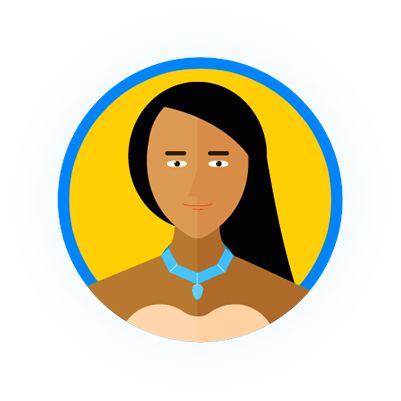