Not to be confused with Alexander the Mediocre or Alexander the All Right Sometimes, Alexander the Great was born in 356 BC in Macedonia.  His father, King Philip II, ruled the area known as the Balkans for 23 years as a Greek King.

Normal kid excuses wouldn't cut it if Alexander brought home a C+ on a test.  "The teacher is terrible and hates me! or "All we do are worksheets, it's soooo boring!" weren't acceptable. Taught by Aristotle, Alexander's mind became sharp and cunning.  If Aristotle taught you, imagine the kind of arrogant superlatives you could put behind your name, right?

Alexander had trouble with trust after the assassination of his father.  King of Macedonia at age 20, Alexander rose to the throne when his father was betrayed by those he trusted.  To make sure the same did not happen to him, he had everyone around him killed.  That'll show 'em!

Alexander's 13 year reign can be summed up by one word: expansion!  He conquered and created one of the largest land empires in the history of the world that stretched from Greece, south to Egypt and east to Afghanistan.  He was the Floyd Mayweather of expansion minus all the domestic violence charges.  He won seven major battles and hundreds of smaller skirmishes without ever suffering a defeat.  In fact, his tactics are still studied at military colleges around the globe.

Alexander the Great was once blocked by an island fortress named Tyre. Tyre was virtually impossible to attack since it sat half a mile off the coast of Lebanon in the Mediterranean Sea.  Since no ships existed which could support the catapults he needed for the attack, Alexander instead had his army dig a canal by hand from the mainland to the island - through the ocean! No cranes or concrete. Just big rocks and wooden walls stacked on top of a sandbar. If that wasn't exhausting enough, the first of these canals was burned down by Alexander's enemies on Tyre. So he ordered his army to re-build it - and finally took the island seven months later.

If Alexander the Great had an Instagram account it would have been filled with selfies.  You are probably wondering how could that possibly be known?  His vanity could only be matched by a Kardashian considering he named conquered cities after himself.  Over 70 cities bear some version of his name; Alexandria, Egypt is the most notable.  Hell, he even named a city after his beloved horse, Bucephalus, when he was mortally wounded in Pakistan.

Imitation is the greatest form of flattery! Alexander really loved how the Persians dressed and their sense of style and function in their wardrobes. So after he conquered and killed most of them, he started dressing like them!

His wife, Roxana, told him to put on the red light when it came to his extramarital lovers!  Alexander had one main wife and two side baes.  He picked up Stateira and Parysatis after he conquered Persia.  Nothing says romance like killing someone's father and then holding them captive with their cousin and having a joint wedding.  After Alexander died, his first wife killed his second wife.  If only Maury Povich had a relationship show back then.  Drama!!

The cliche of "thinking outside the box" applies well to Alexander the Great.  Alexander was marching through Turkey and came across the Gordian Knot.  The knot was intricate and many had unsuccessfully attempted to unravel it.  Legend has it that whoever untangled it would become the unquestioned ruler of Asia.  Alexander looked at this messy knot and attempted to find the ends.  He became frustrated and decided to slice through it with his sword like a G!  Boom!  Box destroyed!

Alexander unexpectedly died at age 32 after drinking an entire bowl of wine while visiting Alexandria, Egypt.  Although he suffered mightily for 11 days as he died, the end was sweet since his body was dipped in honey for preservation purposes.

He is often considered one of the most influential figures in history since he connected east and west with his massive empire.  Science and math exploded after the diffusion of both cultures.  Most lasting; however, were his tactics that still persist some 2,500 years later. 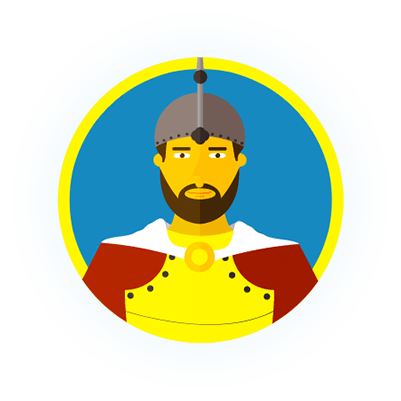