Most of what you've heard about Joan of Arc is wrong! Joan was not her real name and she didn't directly fight in battle. But what's a good war hero without a bit of embellishment eh?! Joan was extremely courageous and even though she wasn't in battle herself, she did help plan the French army's strategy and lead them to victory over the hated, invading English. That is, before she was burned at the stake as a heretic - and all this before she made it to the age of 20!

Scholars know little about Joan's childhood but you'd think that she was from the city of "Arc" since she was known as Joan of Arc...but no! She was not from Arc, did not know Arc, never built an ark, nothing! She was actually born in the small farming village of Domremy in northeastern France (not as catchy of a name for publicity purposes) and she preferred to call herself "Joan the Maid" as a reminder of her humble roots.

Starting at the age of 13, Joan became famous for her visions from God . Even though doctors today discount Joan's visions as either schizophrenia or epilepsy, these visions inspired the French to important victories during the Hundred Years' War. Keep this in mind the next time you write off as crazy that fella speaking to himself on the sidewalk. He's only about 2 or 3 steps away from being a national hero by French historical standards!

Though she was young, Joan of Arc was clear about letting soldiers know exactly who was boss. When she found out that some soldiers had stolen meat and rations, Joan taught them the ultimate lesson by banishing the mistresses and prostitutes that accompanied the army until a large victory was achieved. This lack of women helped raise the "fighting spirit" of the men in the army, who were so wound up from not being allowed to fornicate that they finally broke the English grip.

Joan became known as a cross dresser way before it was ever fashionable. She dressed as a male soldier - heavy armor, metal helmet, clumsy boots, and all - and cut her hair into a short bob in order to better blend in with her troops. Hundreds of years later in the 1920s, trendy flappers in Paris cited Joan of Arc as the reason they bobbed their hair.

Captured by the English and condemned by priests for the voices she heard, Joan of Arc was burned at the stake for being a heretic at the age of 19. Her charred body was left out for many to see and to prove her death. Days after her execution, her body was burned twice more and her ashes were thrown in the Seine River in order to dispel the mystique she carried in the minds of her soldiers.

In an ironic twist of fate since she was condemned to death in 1431 by priests, the Catholic Church decided to canonize her as the patroness of soldiers and France in 1909. All in all, not too shabby for a self-proclaimed "maid" which most doctors nowadays would diagnose as crazy. 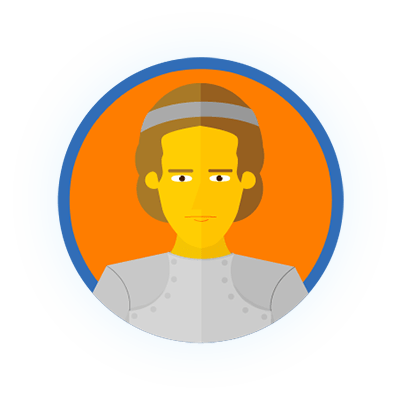