He fired the first shots of the French & Indian War, defended America in the Revolutionary War (with the help of the French), kept America out of more wars and was just generally awesome. Probably known best as the "Father of His Country", George Washington was and still is Mr. America, all the while he had no middle name. If he did have a middle name it probably would have been "Colossus", or "B.A." Other nicknames should have included "The Mount Vernon of Truth" or the "Toothless Titan."

Born as the oldest of seven children, George Washington had to grow up quickly due to the fact that his father died when he was 11. At 27, he received his first military post in the Virginia Militia and helped fight against the French and French-allied natives in the less than creatively named French and Indian War.

After the real First World War (England and France were fighting all around the globe for colonial superiority in the 1750s), Washington returned to his home, Mount Vernon, and married widowed-cougar, Martha Custis. His estate grew tobacco, wheat and hemp (yes folks, George Washington grew marijuana) production. Washington threw elaborate parties where there were games (billiards, races & poker), dancing (GW loved to move!) and yes, even cockfighting!

After defending the English Empire during the French & Indian War, he joined the patriot cause in the 1770s and was appointed Commander-in-Chief. He responded to the Continental Congress ad: "Wanted: Robust individual with a penchant for leading, can make do with no supplies, good dancer, sneaky in boats during winter, great morale booster during cold weather, able to work with the French, white horse named Nelson & no neck tats." Washington was a perfect fit!

During the war, Washington actually lost more battles than he won but he retreated well (let's leave that out of the textbooks, please) and rallied his troops to fight again.

After leading the Americans past the English (with the help of the French), Washington willingly retired his post and returned home. Surrendering that much power is like when Yoko convinced Lennon he did not need the other Beatles. This move displayed Washington had no desire to wield power a la Caesar and actually put his name in the hat as the first president under the Constitution 6 years later.

Another fun fact about Washington was that he was unable to sire a child. This small detail might have helped naysayers rest easier knowing that he would be unable to establish dynastic Washington lineage i.e. he couldn't become King Washington because there was never going to be a prince!

Washington was the only president to win all electoral votes (he did it twice!). He was given much freedom in setting up the office. He created a cabinet to help with his decisions, a court system to establish legal proceedings, the title of "Mr. President" and donated personal land to build the new capital city. Washington himself never lived in Washington, D.C. while president, he ran the country from New York and Philadelphia. The two-term limit is actually employed because Washington believed he had been president long enough. He was the anti-Caesar when it came to power.

Washington died at age 67 at his home in Mount Vernon in 1799. Controversy still surrounds his death as some believe the practice of bloodletting contributed significantly. One undeniable fact prevailed, the country mourned for months after Washington was interred. Additionally, Napoleon ordered France to mourn for ten days out of respect. 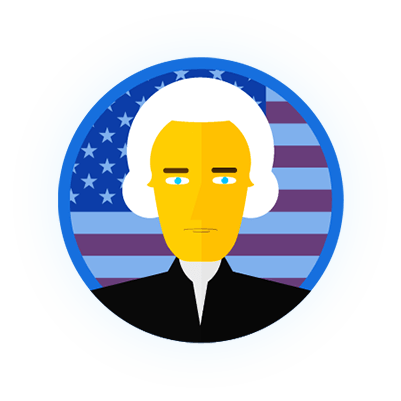