How many Polish people does it take to discover the Earth rotates around the Sun?  One, Nicolaus Copernicus!  All those insensitive Polish jokes might have entertained a silly xenophobe, but Copernicus' influence was no laughing matter as he changed the entire perspective of the universe and started the Scientific Revolution.

Born in 1473, Copernicus belonged to a well-to-do family.  His surname can most likely be traced to the Polish word "kopernik" which means dill weed. Wait, so one of the most exceptional and influential minds of the Scientific Revolution is actually slang for idiot?  Thankfully, he greatly surpassed the expectations levied on him by his surname.

Copernicus was a sort of black van, unlicensed doctor in his younger days. After the death of his father, Copernicus moved in with his uncle and started taking medical care of him and his friends. He medically cared for members of his church and never received a degree.  Sounds like the congregation missed out on a sweet class action lawsuit.

Copernicus better be thankful he was blessed with a sharp mind, because his looks were not cutting it.  He looked like a cross between a poodle and one of the Beatles.  Speaking of the Beatles, Copernicus stated "Here Comes the Sun" and started a "Revolution" "Across the Universe" when he stated the Earth, in fact, revolved around the Sun. Boom!

Nicolaus Copernicus was a polyglot. There, it's been said. He spoke Polish, Latin, German and Greek fluently.  What did you think polyglot meant, pervert? Copernicus wrote most of his published works in Latin, the accepted language of both the Catholic Church and academia.

Besides being a polyglot, Copernicus was also a polymath (still, not what you think, pervert!).  He was able to conquer many different fields during his 70 years on Earth.  He served as a physician, scholar, translator, diplomat, economist and most famously as a mathematician and astronomer.  Look what people are capable of if they are not staring at a glowing rectangle.

The actual proof of the Copernican theory came 65 years after he died, when Galileo spotted moons revolving around Jupiter with his telescope.  The proof illustrated just how important Copernicus' impact on the science community was.  His heliocentric model of the universe correctly displayed how the universal bodies interact. 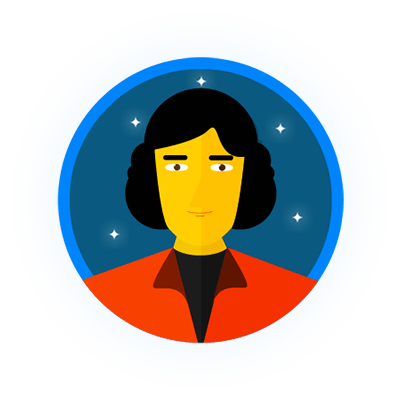