Thomas Jefferson was a lawyer, architect, inventor, planter, governor, author, builder, scientist, botanist, ambassador, Secretary of State, Vice President, President and university founder.  He could read 6 languages and wrote his own version of the Bible called The Jefferson Bible. So what wasn't he good at? Well he was not a good speaker and he wore slippers past noon.

Growing up on a Virginia plantation, Jefferson later attended William and Mary to study law.  Soon after graduating, he began his law practice by advertising on billboards and carriages.  "Been trampled?  T.J. will get you ample!"

Jefferson was one of five men tasked to write the Declaration of Independence.  In a surprising jerk move, Ben Franklin stated that he would not allow his writings to be edited by others.  John Adams deferred to Jefferson, citing his powerful writing style. Ultimately, Jefferson wrote a clear, logical, 4-part letter explaining why the English were acting like tyrannical jerks.

Jefferson served as colonial governor of Virginia during the Revolution where he fled his home when the British invaded (not the Beatles). After the Revolutionary War, Jefferson followed Ben Franklin as minister to France.  That move would be akin to playing a guitar solo after Eric Clapton.  While the debate of centralized power vs. state power raged at the Constitutional Convention back in America, Jefferson insisted his pal James Madison add a Bill of Rights to the newfangled Constitution for his full support.

Elected as the third U.S. President in 1800, Jefferson preferred casual attire at the White House.  He would typically answer the door and accept guests in his jammies and slippers.  No power suits here!

Jefferson's presidential terms read like two seasons of a sitcom - the first was successful and popular (got a smokin' deal on the Louisiana Purchase, implemented low taxes and sent off the Lewis & Clark Expedition) while the second was full of blunders (loss of trade, sailors were kidnapped and he courted his widow's sister who happened to be his own slave...oh snap!).  These second-term troubles gave Jefferson a feeling of defeat when he retired from public life and returned to his Monticello home.

Speaking of Monticello, this guy not only laid the foundations for our Constitution, he also laid a ton of brick foundations!  Italian for "Little Mountain", Monticello took Jefferson 40 years to complete. Designed and decorated himself, Monticello had 33 rooms and a giant dome.  It was Jefferson's Graceland.

Jefferson's last foray into public affairs culminated when he and presidents Madison and Monroe (part of the Virginia Dynasty) founded the University of Virginia in 1819.  Jefferson designed every building, the curriculum, landscaping - everything!  This guy is good!

In order to pay off the astounding debt he'd accumulated from being awesome at everything, Jefferson sold much of his personal library (roughly 6,700 books) to replace what the British burned (those bastards!) during the War of 1812 - or as it's called in England, Damn Colonies: Part II.  This collection would eventually become known as the Library of Congress.

Concerned with how others would memorialize him, he even designed his own tombstone!  To further his awesomeness, he chose to omit the fact that he was a U.S. President on his slab of granite.  On it instead, Jefferson mentioned that he wrote the Declaration of Independence, came up with the notion of separation of church and state and that he was the father of the University of Virginia.

Jefferson died July 4, 1826 - 50 years to the day of the signing of his Declaration of Independence. 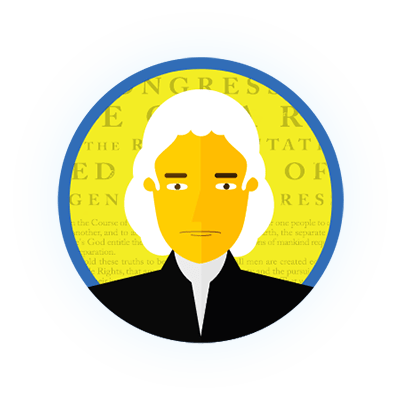