C'mon, you know the old history rhyme. In 1492, Columbus sailed the ocean blue aboard the Saint Clara, the Prostitute and the Saint Mary. Well, at least that's what the ships were really called before revisionists historians "classed them up" with Nina, Pinta, and Santa Maria. Most noted for "discovering" the New World, Columbus, impacted trade and culture much more than history has given him credit.

Born in Genoa, Italy on Halloween (scary) of 1451, Christofo Columbo knew from a young age that he wanted to be a sailor. Columbus had such a desire to sail that he taught himself Latin (the language of nautical charts back in the day) in order to understand the basics of sailing. And everyone says Latin is dead?!

As a young man with captaining experience, he set out to gain sponsorship for a revolutionary trade idea. Cue up your Pet Shop Boys album because Columbus wanted to Go West to get to the east! Mind blown yet?! Columbus was taken as seriously as Charlie Sheen at rehab with his newfangled idea to go around the established trade routes. Portugal, England and France all said no to Columbus' request for sponsorship, but he was eventually signed by Ferdinand and Isabella of Spain. That kind of resolve is only found in champions and carpet cleaner.

So with ships, a crew and some cash, Columbus set off for to discover trade routes to the east by heading west. He did not want to prove the world was round, that had been completed. He did, however, want to find gold and procure wonderful spices and seasonings to concoct his marinade/rub. Eureka, he found paprika!

Columbus set sail in 1492 and made landfall in the Caribbean on an island known as San Salvador in what is today the Bahamas. The area surrounding these island chains were pilfered through in the hopes of finding gold and passage to India. It was also here that his prized ship, the Santa Maria, ran aground and sank. Columbus returned to the area 4 times over the course of 1492-1502.

While credited with "discovering" America, Columbus never actually thought he was in uncharted lands. Columbus believed he was in an island chain near India, hence he referred to the people as indios. The Vikings, led by Leif Erikson (not Adrian Peterson) in the 11th century, are typically credited as the first Europeans to make landfall in the west.

Often noted as a boss explorer, Columbus made a less than stellar governor in the New World. Actually, he sucked. Columbus was so tyrannical that he enslaved most of the native population and drove the European settlers to the point that they removed him. Columbus' body was also wrecked by this point from four trips back and forth to the New World. That's not the hull of the ship creaking you hear, that's Christopher's joints because arthritis set in quickly and made it painful for him to move.

Columbus died in 1506, but his body was moved more than three times. He died in Spain, was moved to the Dominican Republic, then to Cuba and then back to Spain. Columbus moved in both life and death and his discoveries helped create trade between Europe and America. Although he created controversy, Columbus remains a central figure to the inter-connectivity of the world. 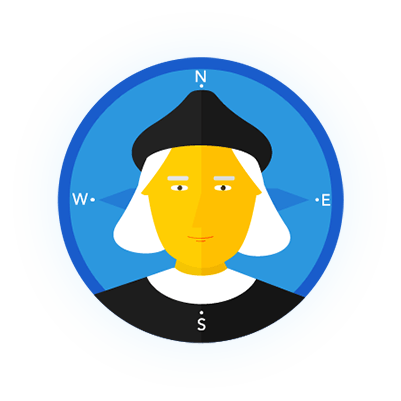