Interestingly, Aristotle was not only the smartest person, but also the most annoying person in the history of mankind.  WHY???  Exactly!  Dude was always asking why and talking, talking and talking.  He's like an overgrown toddler with his line of questioning and his Greek name actually translates to "person in meeting that asks too many questions thus elongating said meeting".

Aristotle was born in 384 BC in Northern Greece (explains the funny accent) to a doctor and lived a life of privilege.  His father served as the physician to the King of Macedonia.  Little Aristotle enjoyed palatial life and had it easy growing up.

To receive a great education, sometimes you have to go to pretentious schools.  Aristotle did just that when he attended simply The Academy and had Plato as his teacher.  Aristotle studied there for 20 years to perfect how to ask "Why?" multiple times no matter the scenario.

These phil-bro-sophers walked around Athens questioning conventions and more than likely annoying the hell out of everyone.  The style of teaching became known as "peripatetic", meaning walking and teaching.

Aristotle was the star student for Plato for nearly 20 years.  After Plato's death, many thought Aristotle would inherit the Academy to continue the outstanding legacy of producing high-minded questioners.  Turned out Plato did not see eye to eye with Aristotle on the proper time to ask "Why?" and Plato left the Academy to someone else.  Aristotle was angered and started his own school in the lyceum movement called "The Lyceum."  Seems creativity escaped him...I wonder why?

Aristotle loved asking why so much that he created a science about it.  He called his new branch of science Causality and it was all about cause and effect although it was not described so simply.

His first student upon the creation of his new school was a boy named Alexander the Pre-Pubescent.  As Alexander conquered the world he eventually changed his name to Alexander the Great.  Alexander respected his teacher so much that he sent Aristotle back specimens.  Aristotle took those plants and animals to create the first zoo and botanical gardens in the world!

Other cultures respected Aristotle's vast library of teacher and student notes so much that they were preserved when Greece collapsed.  Typically a collapsed empire means that everything within it was destroyed, but  Aristotle's name kept the works intact in Asia and Europe.

One of the wisest and most influential men ever, Aristotle's theories formed the basis of most scientific knowledge for close to 1,900 years after his death in 322 BC. Aristotle was the last of the "Big Three" in Greek Philosophy (Socrates then Plato then Aristotle) and mentored three massive world leaders (Alexander the Great, Ptolemy and Cassander). 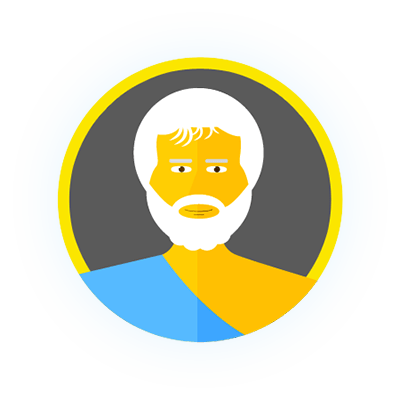