Oh yeah, it's Bloody Mary time!  However, we're not talking about the hangover-curing one consumed at brunch. Unlike the cocktail that makes you feel alive again after a night of libations, this Bloody Mary had a penchant for burning people alive.

Born in 1516 to English monarch Henry VIII and Catherine of Aragon, she immediately let her father down when he found out she was not a male.  Henry loved Mary, but desperately needed a male heir (his marriage to Catherine of Aragon produced many stillborn babies, but no living male successors).

Mary was involved with arranged marriages from a young age.  At the ages of two and six, Mary was promised to French royalty to secure familial alliances.  She was gussied up and paraded around at events and encouraged to display her gifts:  playing the harpsichord (an old, snooty piano), speaking many languages and dancing.  Henry even doted that Mary never cried and had his wonderfully desirable red complexion.

Her father famously married six times and because of this she had a half brother and sister, Edward and Elizabeth.  Like most siblings, they fought over everything.  But instead of who will get the matching buffet and dining room sets, they were busy claiming their right to the throne.  Edward became king at a young age and died at 15.  Upon his death, drama was afoot and Mary finally succeeded in becoming the first Queen of England (this was the pre-feminist movement circa 1550).

Her next mission was to get a man so she could produce a male heir.  She needed someone who was pro-Catholic so she could prevent her pesky Protestant sister Elizabeth from mucking up her plan to restore Catholicism.  Mary found Philip of Spain who was pretty good himself at persecuting non-Catholics.  It was a match made in Protestant-killing heaven!

Mary soon became nauseated in the morning and started gaining weight, and she didn't even go to Taco Bell.  It appeared that her and Philip were about to have a baby which could keep the throne away from her sister, Elizabeth.  However, it was a phantom pregnancy.  Mary believed that the false pregnancy was punishment from God for tolerating heretics in her kingdom.  Now that's hardcore conviction and she was about to make some people pay!

One way to get Mary's attention faster than spinning around in front of a dimly lit mirror and chanting "Bloody Mary" was to be a Protestant.  While in power, she killed 280 religious dissenters by burning them at the stake.  She supported the pope more than the pope supported his large papal tiara!

Although remembered largely for the persecution of religious dissidents, Mary's publicists did a poor job of focusing on her intellect, love of children and following her deep-rooted faith.  She became the first Queen of England and her sister, Elizabeth I, followed her footsteps to become one of the most revered leaders, male or female, of all time.

Upon Mary's death in 1558, she turned the crown over to her half sister, Elizabeth.  Mary was 42 when she was entombed at Westminster Abbey.  Her husband, Philip, even attempted to marry Elizabeth once Mary passed away!  This story was not pulled from a telenovela!  After all the struggles of Henry VIII's daughters, they were eventually buried together when Elizabeth I passed away after ruling England for over 40 years. 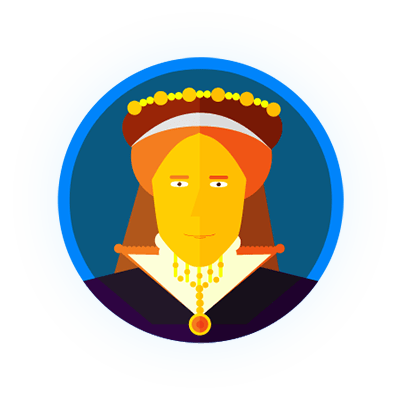