Powerful, intelligent, cunning, and smoking hot made Cleopatra desirable and dangerous.  Famous Renaissance political adviser Machiavelli would have probably feared how much he loved her.

Known as the last true pharaoh of Egypt, she modeled herself after the Egyptian goddess Isis whose name meant "throne." Pretty ballsy power move for someone who was not even Egyptian, but Greek!

Her father, Ptolemy (the "P" is silent like pneumonia), expected much from his daughter when he named her Cleopatra VII which meant "Glory of the father". She learned multiple languages and eventually spoke Egyptian to please "her people."

Most teenagers worry about which selfie to post, single to download or maybe what college to attend, but not Cleopatra, who became ruler at age 18. She was more concerned about which empire to conquer, rival ruler to sleep with or sibling to kill in order to keep power.

So you received Student of the Month and your brother only got Honorable Mention?  Seems like a pathetic rivalry compared to Cleopatra and her brothers.  She had to rule alongside her brothers for a time and eventually killed them - one in battle and one with poison.  Family reunions and holidays had to be awkward after that!

After substantial time in charge, she hoped to align herself with the hunky Julius Caesar to create one of the first power couples. Move over Brangelina and Kimye, Caesarpatra was the first celebrity power couple!

Cleopatra believed that if she rolled out the red carpet Caesar was more likely to become a powerful ally. Probably did not hurt that Cleopatra served as the fully nude spindle that the carpet was rolled around.

Turned out that Julius had a soft spot for dramatic, nude-human-burrito entrances because 9 months later Caesarion was born to Cleopatra. Caesarion, which meant "little Caesar", proved that Julius and Cleopatra were "hot and ready!"

Soon after Caesarion's birth Caesar was assassinated and Cleopatra was forced to flee back to Egypt.

Mark Antony served as one of Caesar's most trusted generals. After the death of Caesar, Mark Antony went to Egypt to ask for Cleopatra for her support. Turned out he got much more than her support. The two fell in love and had 3 children.

As the dispute over the rightful heir to Caesar's empire continued, it became clear that Cleopatra and Antony were going to be offed by rivals. The two decided nothing says love better than committing suicide together i.e. Romeo and Juliet or Adolf and Eva. The 2 lovers used a poisonous snake to do the trick. Dead at age 39, Cleopatra ruled for 21 years and as the last Pharaoh in the Alexander the Great line. 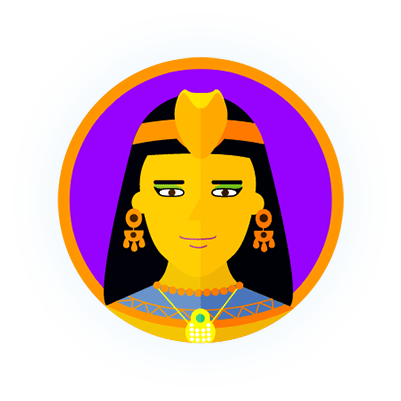