Not to be confused with the swanky Sir Francis Drake hotel or sofas, this Francis Drake was a privateer.  That's college speak for a pirate endorsed by a political leader.

Commissioned and knighted by Queen Elizabeth I, Drake was given license to do whatever necessary to the Spanish as long as the English profited.  He was the James Bond of the Elizabethan seaways minus the sexually suggestive females, debonair wardrobe and calculated puns.  He looked like a cross between a conquistador, haberdasher and the mustachioed Rollie Fingers (Google it) all complete with an Elizabethan collar (think of the lampshade a dog wears to prevent scratching).

Born as the oldest of 12 sons, his father did what any sensible father would do with bookoodles of children in the 1540s - he rented Francis out to a local merchant and sailor.  As an apprentice, Drake soon excelled in maritime endeavors and the pirating began.  Like the overgrown bully in 4th grade, Drake shook down smaller kids (French merchant vessels) and took their riches early in his career.

He soon lusted for bigger booty (not that kind, pervert!) that the Spanish extracted from the Inca Empire.  Drake set off for the Americas in 1566 in his early twenties.  Drake's first attempt to steal silver and gold from the Spanish (who stole from the Inca) led to his near-death escape.  Caught mid-loot, Drake was injured and bled profusely.  Drake returned with some riches and delighted Elizabeth I, but it was after this disaster that he began his ill-timed (almost 400 years too early) bracelet campaign, "Sailstrong".

Drake's semi-lucrative quest intrigued Queen Elizabeth I and she commissioned him to wreak even more havoc on the west coast of the Spanish Americas and also circumnavigate world!

After Drake turned the Straights of Magellan, he realized his boat lacked the "it" factor with a snazzy name.  In a PR move less drastic than the transformation of Jared from Subway, Drake rebranded The Pelican the Golden Hind.  Nothing says pirate ship like gold butt!

The Spanish protected their western ports about as well as the Kardashians protect their privacy and dignity.  They underestimated the English's ability to sail to the west coast of the Americas and Drake made them pay heavily.  Drake looted so gloriously that when he returned home he picked up the nickname "The Queen's Pirate."

The Spanish also bestowed a moniker upon him - "El Draque" which meant "The Dragon."  There was nothing mythical about the amount of financial pain Drake inflicted upon the Spanish.  Forbes magazine projected Drake's fortune around $115 million.  This money helped Elizabeth I cement England as a world power and defeat the Spanish Armada.

Drake, who was second-in-command during the naval engagement, believed the English should use fireboats to destroy the Spanish Armada.  In an ironic twist, "El Draque" used old cargo ships set ablaze to burn and undo the world's most powerful navy.  Guess this dragon did breath fire.

After gloriously defending England, Drake set sail one last time for Puerto Rico.  While looking for more gold he found diarrhea's steroid cousin - dysentery! Drake knew he could not make it back to England so he requested to be buried in full armor inside a lead coffin.

For 55 years, Sir Francis Drake served to make England and Elizabeth I powerful while at the same time Spain weaker.  A polarizing figure through and through, Drake was either a hero or a pirate depending on the point of view. 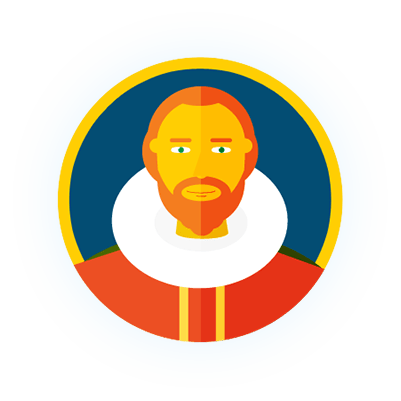