Sir Isaac Newton's laws of motion applied to everything except his body on the dance floor!  One of the most inventive scientific minds of all time was almost never to have been.  Sir Isaac Newton was born prematurely by almost 3 months in January of 1643 in England.  To make matters worse, his father died soon after and his mother fell in love with a man who disallowed Isaac from living with them.  That's colder than the celestial bodies he studied with his practical telescope!

If Sir Isaac Newton had a trendy t-shirt it would read "Isolation Is The New Black".  When the Black Plague broke out in Europe, Newton could not keep going to school so he moved back in with his parents. During the next 18 months while working almost entirely in isolation, he developed calculus, optics, and the theory of gravity at the age of 26!  We all need to take a long, hard look in the mirror and ask "What are we doing with our lives?"

Credited as the father of physics and calculus, he also tried to create gold.  This ancient craft known as alchemy was pretty much black magic in a laboratory where scientists hoped to turn pretty much anything into gold.  Science today has a version of alchemy where crap can be turned into gold - it's called Auto-Tune for talentless, but beautiful pop stars.

You know that sweet Pink Floyd Dark Side of the Moon album with the prism turning white light into the whole color spectrum?  Yeah, Sir Isaac Newton figured that out along with the fact that if you play that album backwards during The Wizard of Oz it turns you into a hippie with conspiracy theory tendencies. Pretty smart dude!

It's time for another installment of "Your Kindergarten Teacher Lied and Is a Hack!"  Newton was popularly known for the anecdote that an apple fell and hit him on the head while he was theorizing (something you and I do not do).  After rubbing his mullet, he received an epiphany for his theory on gravity.  Yeah...that was all a lie.  He thought it would sound good for publicity so he went with it.  Turned out he just looked out the window and saw some fruit fall one day (#lamesauce).  Still, Newton's got gravity on lock!

Like many great geniuses, Newton was eccentric, had questionable hair, a stutter and zero self-confidence. One can only assume that while the rest of the human population focused on the areas he lacked, he was busy excelling in math and falling behind in manners, appearance and hygiene.  Newton even had to be convinced by a friend to publish his idea of "calculus" because he thought it would receive lots of criticism and that might hurt his feelings.

Newton's best friend actually turned out to be one of his worst enemies.  His dog, Diamond, knocked over a candle in his laboratory and ignited a fire that destroyed 20 years worth of work.  Just think how many more math and science courses you would take in high school if it were not for Diamond's tail wagging uncontrollably when Sir Isaac said "treat!"

Despite being a leader in the Scientific Revolution, Newton still kept close ties to the Church.  So close that he was buried in one!  Newton was buried in 1727 at one of the most famous churches, Westminster Abbey.  He was influenced by the greats and he influenced greats that followed.  He unequivocally changed the field of mathematics forever and advanced the field of optics. 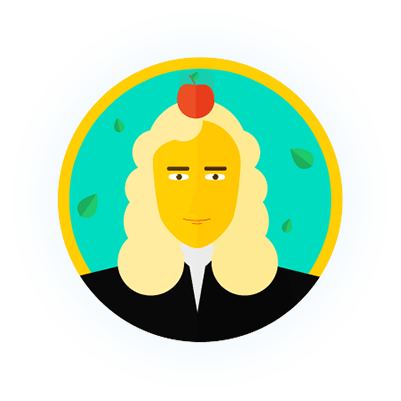