After the United States purchased the Louisiana Territory in 1803, President Thomas Jefferson sent Meriweather Lewis and William Clark along with the Corps of Discovery to see what he bought (what happened to "drive before you buy" eh?). Besides a grueling journey, there were other major problems - no one spoke Native American dialects or knew the land. Enter Sacajawea, the talented translator and gallant guide!

Born in 1788, her name meant "bird woman" in Shoshone and the journey westward definitely would not fly without her. When Sacajawea was just 15 a French fur trapper named Toussaint Charbonneau bagged the ultimate catch when she was promised to him as a result of a bet. Who said you couldn't gamble with love? They were married and soon expecting child (probably not ideal in her mind).

In 1804, Lewis and Clark stopped in the village to inquire about translators and guides. Sacajawea's new husband volunteered her to help the Corps of Discovery navigate the Rockies and interpret the languages of other tribes. Talk about awkward, Sacajawea would now have to translate "This land is now part of the USA and Thomas Jefferson is the Great Father."

"Can we pull over at the next stop to use the bathroom?" was a phrase not heard on this trek. In multiple journal entries Lewis and Clark praised the young Sacajawea for never complaining and keeping pace with the other members. Hold up the "Baby on Board" placard because Sacajawea was 16 & pregnant (now her story is a reality show worth watching) at the beginning of the journey and gave birth to baby Jean Baptiste along the way! She hiked, paddled, pushed (a baby), climbed and swam for almost a year. Those are the kind of tales get Sacajawea trending for a #WomanCrushWednesday.

Oh you're doing a kale master juice cleanse paleo ancestral diet!? Sacajawea was in the paleo game long before it became en vogue. She saved the entire crew from starving during winter when she boiled up some delicious low carb roots. So next time you think your barefoot walk to Whole Foods is arduous, try strapping a baby to you at 10,000 ft. while trouncing through the snow and foraging for sustenance. #SacajaweaStrong

In Montana, Sacajawea again proved her worth when a boat capsized carrying instruments, maps and supplies. Sacajawea jumped in and pulled out all of the valuables while she had her baby strapped on her back in a papoose! The loss of the drawings, journals and maps would have rendered the entire trip useless - thanks Sacajawea!

Sacajawea's death has caused some controversy in the years since. Some say she died in 1812 of typhus while living in St. Louis. Yet other sources state that Sacajawea grew discontent with the marriage and left her husband, Charbonneau, a la Diana and Charles. After her divorce, Sacajawea allegedly departed from St. Louis and headed across the Great Plains to marry a Comanche man where she died fifty years later in 1884 in Wyoming.

While her exact resting spot remains a mystery, her heroism and importance to the Corps of Discovery are not lost. To honor her spirit and sacrifice, the American government made sure that Sacajawea can always be found, that is, on the U.S. dollar coin. 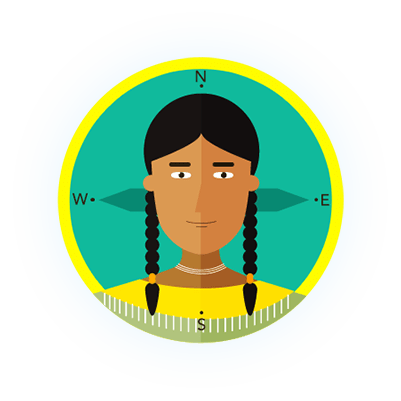