Johann Sebastian Bach was born in Germany in 1685 and could play the organ and violin by age 5. He had the largest posse in classical music, as surely you've heard of the Baroque Boys (Handel, Vivaldi and Pachelbel to name a few). They are synonymous with classical music and Bach was the Don Corleone of this movement.

Bach was born to a large family of musicians (think Jackson 5 meets the Partridge Family plus those Hanson kids) which helped young Johann develop and hone his musical skills. He was drawn to the organ from a young age and it became to Bach what an auto-tuner is to a pop icon.

Like any artist, Bach went through many phases, moods and periods. He started off as a secular composer, then he was pulled into the hot dance music scene of the early 1700s and eventually devoted a large portion of his compositions to religious music. He described music this way: “The aim and final end of all music should be none other than the glory of God and the refreshment of the soul. If heed is not paid to this, it is not true music but a diabolical bawling and twanging.”

Bach came from a musical family and he produced one, as well. He sired more offspring than Triple Crown winner Secretariat - 20 children! Of those, four went on to be accomplished composers but none could eclipse Papa Bach.

How do you know that J.S. Bach was the best composer that has ever been? Well, let's just say he challenged Louis Marchand to a harpsichord duel and won! Who is Louis Marchand? Exactly! No, Bach did not kill him...literally. But he tickled the ivories so nicely that Marchand, who was considered one of the best harpsichordists in the world, fled the town in shame.

Every great artist struggles with some limitation. Beethoven lost his hearing, Ray Charles could not see and van Gogh was bad with knives. Bach struggled with sight and towards the end of his life could barely see. It is said that his later work illustrated the world which he could no longer view.

Need more proof of J.S. Bach's awesomeness? Skid Row's front man, Sebastian Philip Bierk, needed to lose his Canadian nice guy personality so he could rock the arenas. He changed his name to Sebastian Bach in honor of the hard-charging German and then cranked out all the teased-hair metal one could ever ask for.

Who did he influence?!? How about who did he NOT influence?! Bach was more musically influential than any other composer but the only problem for Bach was that he was not alive to enjoy the praise. Most of his praise came after he died in 1750. Nowadays, scientists play Bach to get plants to grow faster (true story)! 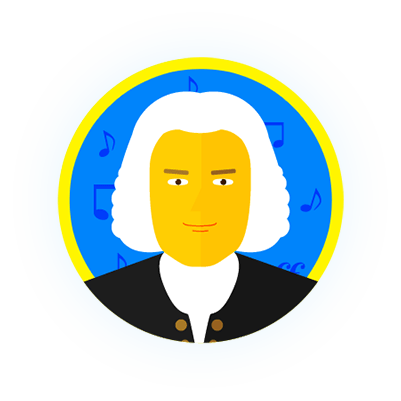