His mustache said refined and his eyebrows stated he was distinguished with a touch of bizarre.  Samuel Clemens, better known as Mark Twain, often donned his iconic white suit which evoked images of Doc Holiday crossed with Dos Equis’ "Most Interesting Man in the World."  Although he grew up a ginger, he majestically grayed into the epitome of a Southern gentleman.

Born in Missouri along the Mississippi River in 1835, Twain was sickly and coddled until the age of 10.  In fact, his mother wasn't even sure that he'd survive til adulthood.  Perhaps it was this upbringing that led Twain to embellish the truth like an Enron bookkeeper and stated that “fiction is obliged to stick to possibilities. Truth isn’t.”

Twain was first exposed to writing when he worked as a printer for his brother at the age of 17.  Soon after, as literary work was hard to come by, he found work on the riverboats steaming along the nearby Mississippi River.  It was here that Twain took his pseudonym from a riverboat associate that often signed papers with “Mark Twain” - which in the boating industry meant “two fathoms deep” (12 feet in depth).

The 1865 Civil War cut his riverboat captaincy short, so he moved to the Nevada Territory with his older brother, Orion.  At this time, Nevada was truly the "wild west" (think less law enforcement than a Tijuana nightclub). Twain found that he did not particularly care for the rampant lawlessness and danger and headed off for San Francisco.

It was here in the Bay Area that Twain heard about and then wrote the famous "Jumping Frog" story that was common out west.  Published by the New York Saturday Press, this tale brought Twain his first taste of fame.

While traveling abroad writing tales, Twain met his future wife, Olivia. Once they got hitched, Sam and Livy then moved to Hartford, Connecticut, where he befriended Harriet Beecher Stowe (author of Uncle Tom's Cabin) and wrote The Adventures of Tom Sawyer.  The book has never been out of print - just like the Bible!

The next year Twain began work on The Adventures of Huckleberry Finn, but struggled because it was written in “Huck’s voice.”  It took Twain ten long years to finish it. To add insult to injury, after he did finish it, nobody wanted to publish his latest work - so Twain began his own publishing company just to push his new book.  Unlike most sequels, save the New Testament, his follow-up was successful.

Though a great storyteller, Twain made worse investments than a divorcee watching all night infomercials.  In one instance, he put over $200,000 (roughly $6,000,000 today) into an automated typesetting invention called the Paige Typesetter that never seemed to payoff or work properly (see the hydrogen blimp).  Only two of them were ever produced.

At the age of 59, Twain filed for bankruptcy.  Plagued by many abrupt career changes, poor investments and the stock market Panic of 1893, he was even forced to sell the family home. About to move to Europe in shame, Twain and his family were bailed out by an unlikely source - an oil executive named Henry Rogers who was a fan of Twain's work.

Sent on a speaking tour with all revenue firmly managed by Rogers, Twain could finally afford to pay back all of his creditors.  Even though he didn't legally have to, Twain paid off all his old debts. Morals that strong are only seen in a Hunger Games book!  This valiant move helped cement Twain's name in American History and prevented him from becoming a punchline.

Like an elderly person in a self-checkout lane, the last years of Twain's life are often described as his “bad mood.”  Twain struggled with the fact that he was not viewed as a writer, but a humorist.  So he wrote without humor and critiqued society (a sure way to win friends and influence people).

In true Twain fashion though, he returned to humor in his dying hours to give his caretaker satirical advice on how to get into heaven. Born shortly after a visit by Halley's Comet, Twain predicted that he'd also "go out with it". His prediction was right; Twain died the day after the next visit from the comet - 74 years later. 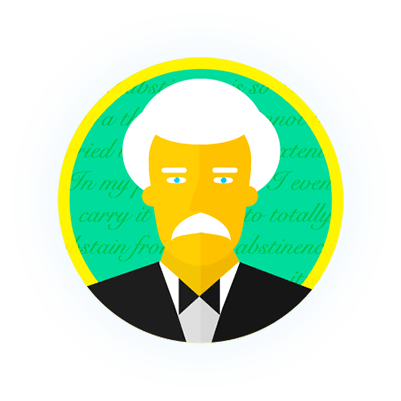