Cyberbullying affects countless teens and adolescents. A 2019 study of 4,972 middle and high school students in the United States between the ages of 12 and 17 shows that 36.5% of the students have been cyberbullied in their lifetimes. Trends are showing no sign of slowing down. Other studies report that 60% of young people had witnessed their peers being bullied, but they didn’t intervene for fear of becoming targets themselves. Victims of online bullying are much more likely to use alcohol and drugs, avoid school, have poor grades, experience depression and low self-esteem, and may even contemplate suicide. 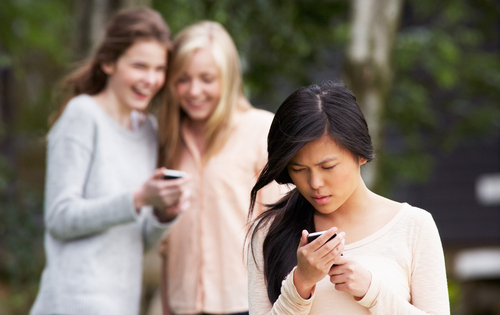 Cyberbullying is a broad term and is any form of abuse repeatedly directed at a child through technology by another child. According to “Bullying Beyond the Schoolyard: Preventing and Responding to Cyberbullying,” cyberbullying is defined as “willful and repeated harm inflicted through the use of computers, cell phones, and other electronic devices.”

The difference between traditional bullying, which takes place in person, and cyberbullying, is that the latter must involve the use of technology. Additionally, to be defined as cyberbullying, the interaction between two or more people must contain the following elements:

Cyberbullying takes place online through social media sites, like Facebook or Snapchat, in chat rooms, or via instant messages or text messages on their mobile phones. Types of cyberbullying include:

With 95% of teens reporting going online at least once daily and 45% stating that they are "online constantly," the amount of potential exposure to cyberbullying is high. Unlike bullying, cyberbullying can be unrelenting and seem inescapable since it is online and on mobile phones. It can happen at any time of the day, follows pre-teens and teens home after school, and is often completely anonymous.

Cyberbullies can create fake social media profiles and download apps that provide temporary disposable numbers that allow them to send threatening text messages without the victim knowing the identity of their attacker.

In addition to the anonymity, messages, images, and videos can also be spread very quickly via social media sites, instant messages, and group text messages. Once the information has been shared it's impossible to permanently delete the information since it can be downloaded by others and repeatedly uploaded.

Cyberbullying and Kids With Learning Differences

Bullies target anyone different from themselves, including those with disabilities, mental health issues, or learning differences. The bullies say mean things about someone who has ADD or ADHD; a student that is dyslexic, on the autism spectrum, or simply learns differently than other students. The bullying takes away attention from the bully’s issues and places them on others. Plus, teens with learning differences or disabilities are less likely to fight back. Many schools have anti-bullying policies, however, that does not prevent cyberbullying which can take place in or outside of the school.

Please see the table below for a full breakdown of cyberbullying laws in each state.

For more information on the laws and policies in your state, the Cyberbullying Research Center provides an up-to-date PDF with descriptions of all current laws throughout the United States.

For more information on sexting, we've created a guide with tips on how to prevent teens from sexting and what to do if private photos and videos are leaked.

How to Stop Cyberbullying

Cyberbullying is an issue, but it's one that can be stopped. There are many online resources to help both parents and children cope with cyberbullying and prevent it.

What teens can do...

...if you are a target of cyberbullying:

...if you see cyberbullying:

...to protect yourself from cyberbullying:

Pre-teens and teens usually won't share what is happening to them with their parents, so it's important for parents to pay attention to any changes in their child's attitude and talk about the effects of bullying and what to do. Nearly 60% of parents of children aged 14 to 18 report that their children have been bullied. Even if you don't think your child is a victim, they could be seeing cyberbullying everyday.

What parents can do...

...if your child is being cyberbullied:

...if your child is a cyberbully:

...to prevent cyberbullying from happening: