Parents Guide to Sexting: Dangers of Sexts and Facts About Sexting

"Sexting" - i.e. sending a compromising image or video to someone else - is a dangerous idea no matter your age, gender, or sexual orientation. Once you send such an image to someone, you have no real control over it. The person you sent it to could forward it to their friends or even post it online if your relationship sours. They could also be careless with their phone and lose it, or not have it locked with a passcode. 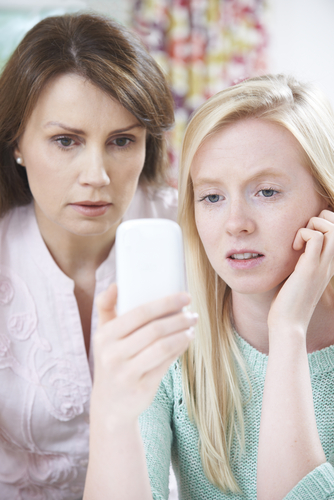 It might not even be the person that you send it to who accidentally leaks your sext. Imagine if you lost your phone or if someone hacked into it, are there images saved to your camera roll that you wouldn't want others getting their hands on?

Before you snap a photo or video and send it out to someone it's important to think about the potential consequences of doing so.

For more information the Cyber Civil Rights Initiative gives in-depth descriptions of the laws that are in each state.

How to Protect Yourself From Sexting

The best way to protect yourself from the potential nightmare of having sexual photos or videos leaked without your consent or knowledge, is to not take sexual photos and videos on your phone or computer.

You could have your property stolen or your accounts hacked which could leak information, or you could break up with the person you sent them to. You could even accidentally send them to the wrong person.

It is important to make sure you take screenshots of the images and videos that were posted without your consent before they are removed. These screenshots can be used as evidence when filing a report with your local authorities.

How to Protect Your Teen From Sexting

Right now we are living in one of the biggest digital generation gaps. Individuals born in the mid-90s and later are digital natives, meaning that they were brought up during the age of widespread digital technology adoption. Children in this time period are referred to as Generation Z, Gen Z, or the iGeneration. They follow millenials, many of whom are also digital natives.

Some parents may feel that they know what their teens are up to on social media, but they could be mistaken. Dazed has created a short documentary that examines teens and sexting, specifically focusing on Snapchat and the practice of sending images and videos through DMs (direct messages).

Snapchat has become a popular platform for sexting since photos and video clips are deleted after they're viewed, this isn't always the case though. Back in 2015, the Federal Trade Commission found that third-party apps could be used to log into the app and could be used to view and save snaps indefinitely, the deletion feature only worked on the official Snapchat app. This finding came about while the FTC was investigating a complaint that the app had been attacked by hackers and 4.6 million usernames and phone numbers had been compromised. Snapchat stated that they had addressed the concerns that the FTC had raised.

Even though these problems were addressed, there are still ways in which snaps can be saved. A recipient can screenshot a snap and save it to their camera roll, or they can record the snap with another device. Also snaps that are sent via Snapchat's chat feature can be saved by the recipient by pressing and holding it.

Today's parents of teenagers should discuss the dangers of sexting in order to help their children avoid the potential consequences. Teens who sext make themselves vulnerable to cyberbullying and sextortion, a form of cyberbullying that is now becoming more frequent.

Thorn, which was founded in 2010 by Ashton Kutcher and Demi Moore, is bringing together tech companies to fight the sexual exploitation of children online. One of the main issues that they seek to address is the growing problem of sextortion among teens. Thorn conducted a survey of sextortion victims aged 18-25 years old, they found that 60% of victims knew the perpetrator in person before the threats were made. The remaining 40% had met the perpetrator online.

Sextortion most frequently happens across platforms, with 45% of victims stating that they were targeted on multiple ways. The most common platform was social networks (54%), followed by messaging and photo apps (23%).

The study conducted by Thorn and the Crimes Against Children Research Center (CCRC) found that one-in-four victims of sextortion needed the help of medical and mental health professionals, and that one-in-three victims did not tell anyone about the abuse due to shame and embarassment. It's important to build an open line of communication with your teen so that if they ever feel that a situation is out of their control they can come to you for help.

There have been many unfortunate and terrible stories of teens taking their lives after they've had nude photos and videos shared without their consent or knowledge. Many teens will feel that their life in these moments is completely out of their control and that they have no options. This is not true, and it's important that teens feel they can come to their parents for help in these types of situations.

In order to help your teen make sure they know the following:

The most important way in which you can help your child is by making them feel safe in approaching you about the topic of sexting, cyberbullying, and sextortion. To learn more check out our guides on cyberbullying and cell phone safety. In addition, iKeepSafe has many helpful resources regarding cyberbullying and sexting.