Imagine receiving a call, the number which displays on your caller ID is that of your local sheriff's station. You answer worried and ask what the problem is. The caller informs you that they are a deputy and that there is a warrant out for your arrest. 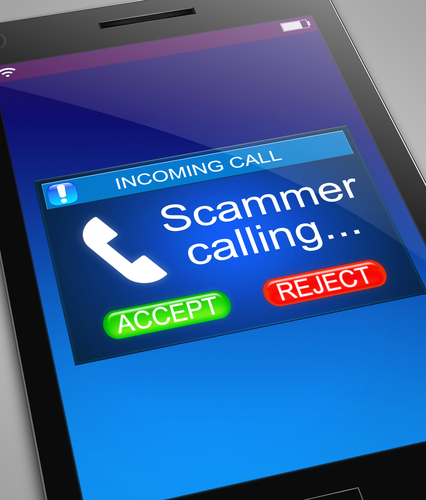 What would you do in this situation? Many people panic when they think about being in trouble with the law, having to go to court, and even worse possibly ending up in jail for something that they haven't even done. This is what makes impostor scams, like the sheriff's office phone call, the third most common type of fraud reported in the United States.

As with all forms of phone fraud there are many variations of the sheriff's office phone scam, below are the two most common ploys.

The caller will inform you that there is a warrant out for your arrest due to a complain that was received from a neighbor, or because you were delinquent in paying a traffic ticket or taxes. They will inform you that there are officers currently on their way to your house to make the arrest. However, if you pay the fine immediately, there will be no need to arrest you.

The caller will ask you to make a payment via wire transfer or prepaid debit card, both of these forms of payment are untraceable and it's impossible to recover the money.

The second common variation of this scam has the same setup as the first variation, but the caller will inform you that they are calling because you missed jury duty.

We have many phone numbers in our phone book associated with this variation of the sheriff's office phone scam:

541-980-1631: Scam call saying they were Deputy Sheriffs, and they had a warrant out for my arrest for failure to appear for jury duty. They had me verify I had funds to pay my fine in the form of a paypal myCash card [sic]. They scammed $500 out of me and wanted more.

401-487-7327: This person is a scammer. Called someone I know and convinced them that they were from the sheriffs department. They gave a story about paying money to prevent going to jail for skipping out on jury duty. $2000. Careful out there.

The jury duty phone scam happens all across the U.S. and is very successful in conning victims out of their money. Again like in the first variation, the scammer will demand that a fine be paid immediately in the form of a wire transfer or with prepaid debit cards.

How to Avoid the Scam

The most important thing to know is that no one working at a sheriff's office will ever call you to demand that you immediately pay a fine or be arrested. No matter what the caller accuses you of doing you have the right to dispute any charge or fine in court before having to pay it.

If a caller ever asks you to make a payment via wire transfer or with a prepaid debit or gift card, immediately hang up.

If you get a call from someone claiming to be from your sheriff's office and threatening you with legal problems hang up and call your local law enforcement to inform them immediately that it seems that someone may be impersonating them. Phone scammers target communities, so chances are you aren't the only one receiving these types of calls in your area.

You can also help warn others about impostor phone scams by reporting them in CallerSmart's online call tracing phone book listings or caller ID app for iPhone.